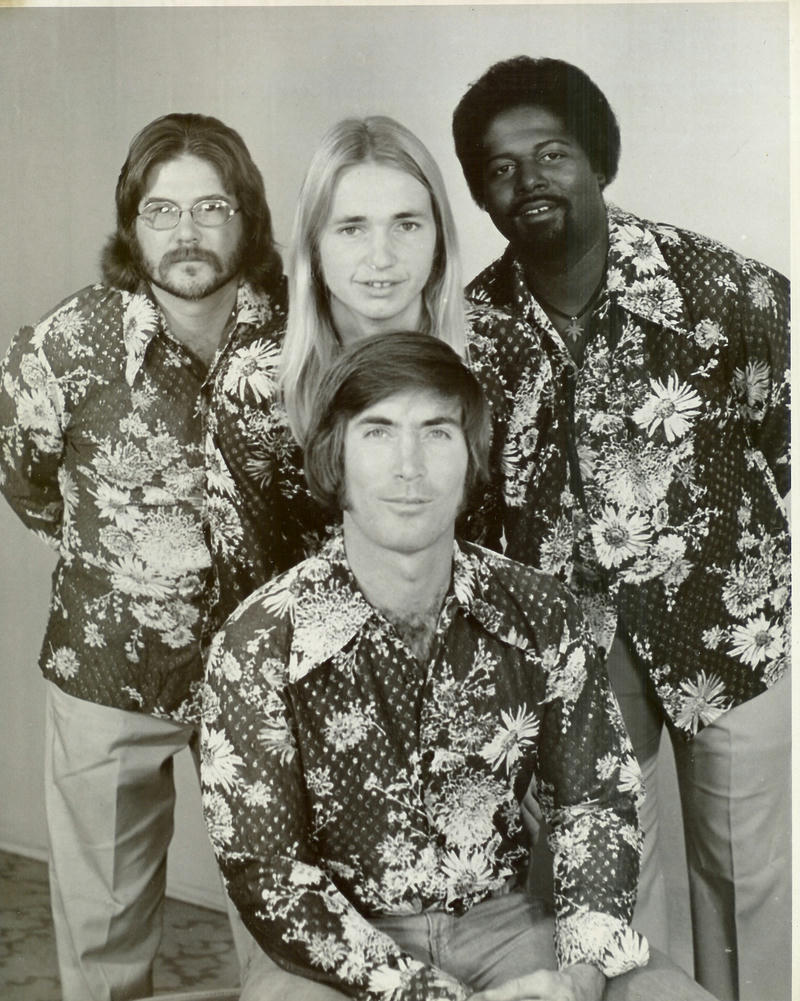 This is my first working band around 1974, 'Bandini-T' with Ray Bumbaugh (front), Melvin Brown (right), Dennis Hanson (left), and I'm in the middle. (I lost track of Melvin so if anyone knows where he is, please have him contact me! Thanks!!) 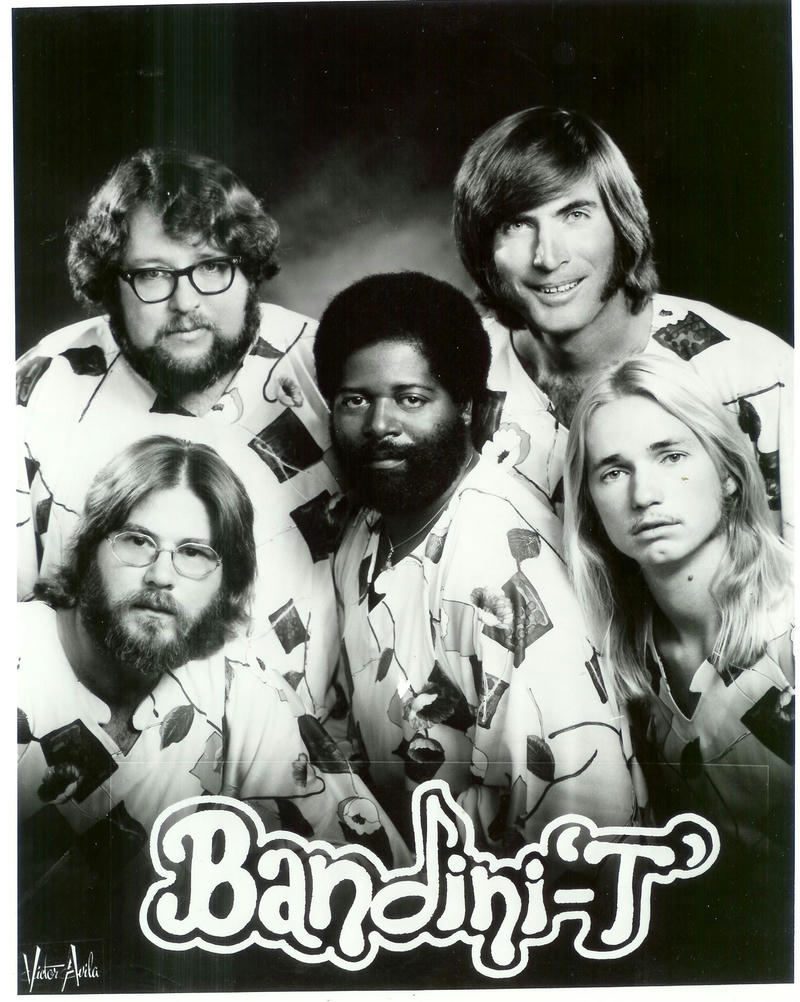 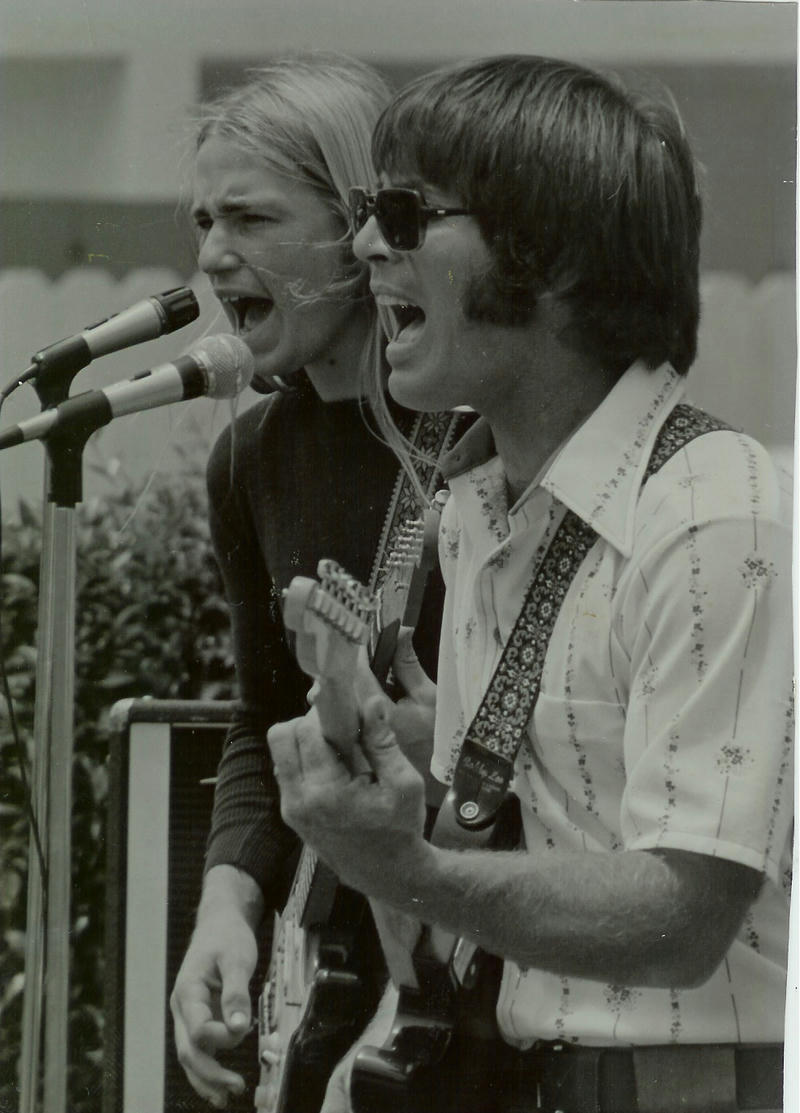 This is the gig that got me fired from my truck driving job. I was supposed to drive to LA and pick up a load of tires, shocks, and wheels for Posi-Traction, but I called in sick so I could do the band job instead. Someone called the house and Susie told them, "Tony's not here, he has a gig today..." 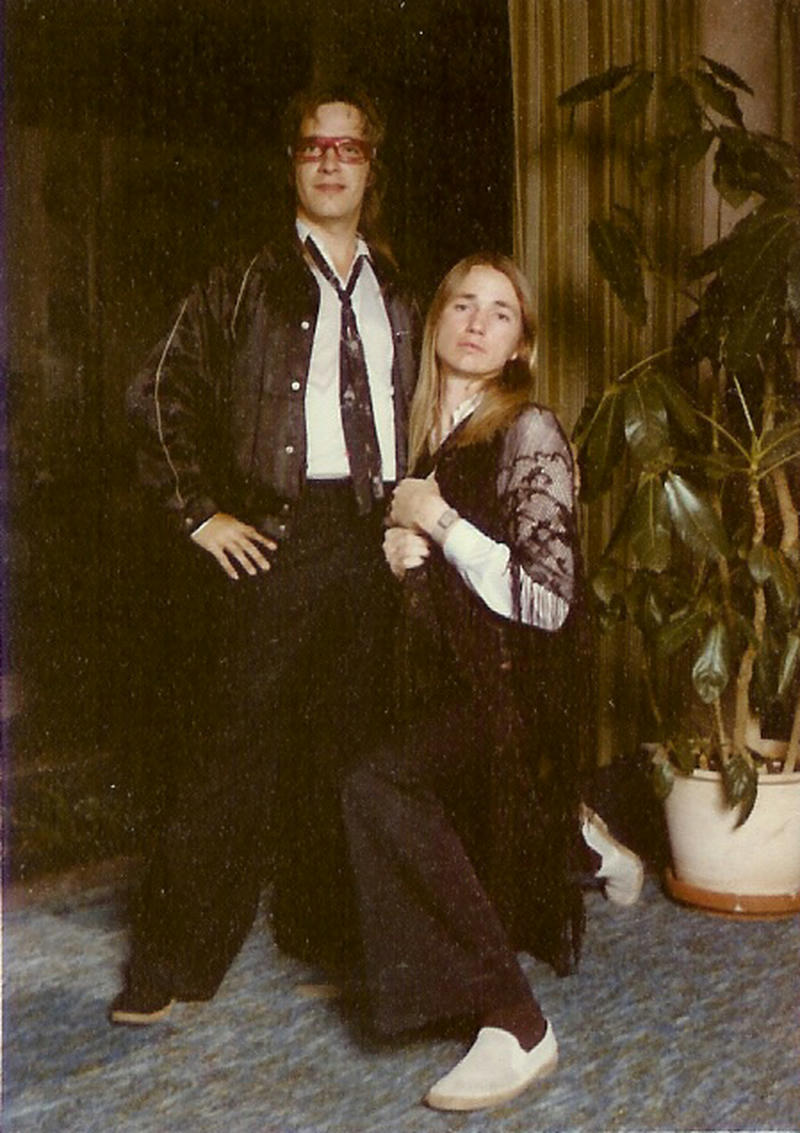 Robin and I acting stupid. 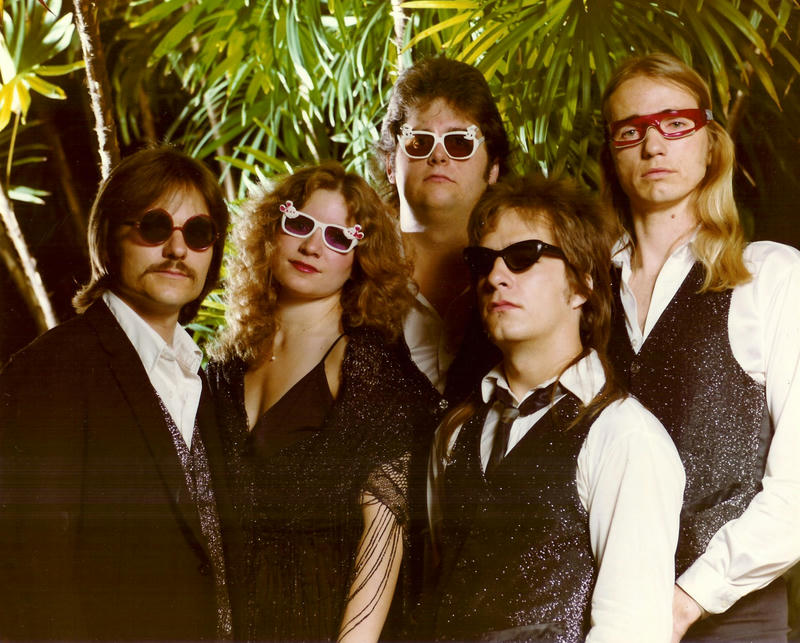 Steve is now the head of the music department at Grossmont College which is where I first met Steve when we had some music classes together. He really looks quite dapper in his Harry Potter shades, eh? Gary and Secret Agent Lana are still married. I haven't seen Robin in many years... (If anyone knows where Robin is tell him to contact me!) 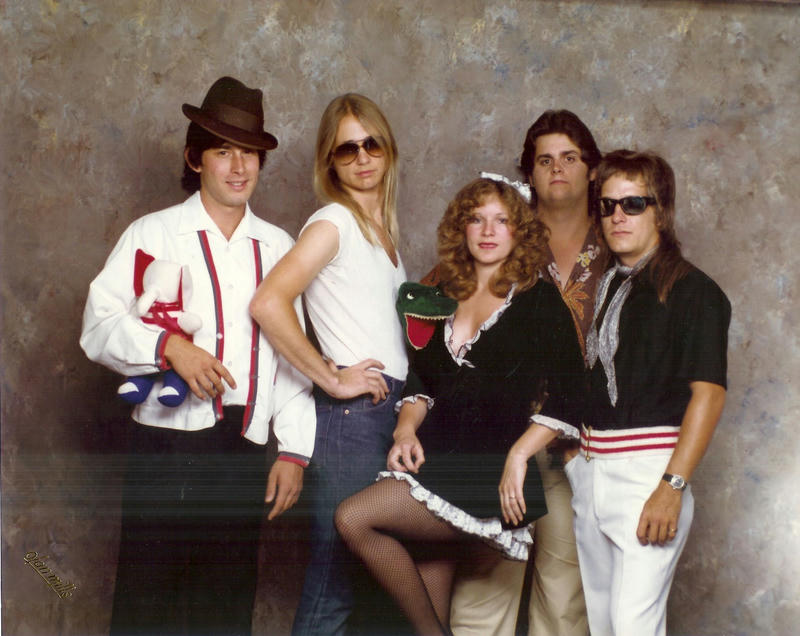 I hope this was a Halloween Gig!

We played a lot of reunions, and we would always have the school photographer take our picture. 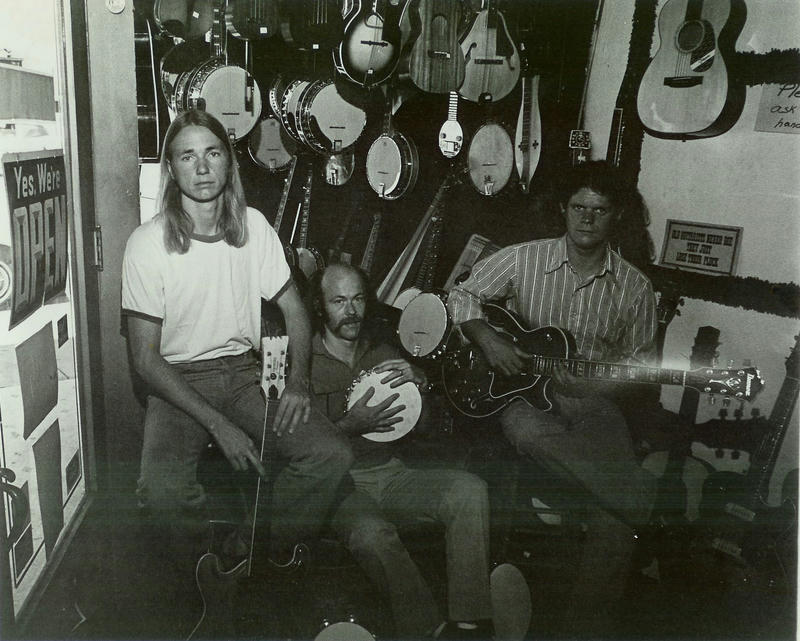 With Steve Chevalier. The picture was taken at my store, Jim's Guitars, one of those, "I think I have a gig and they need a picture right now! Can we come by your store and take one?" kind of shots. 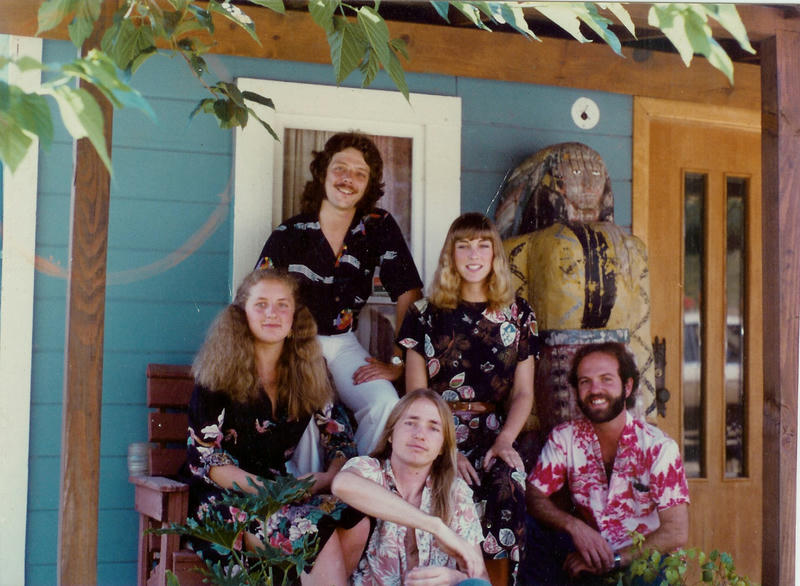 Corey Davis on drums, Mike Herrick on guitar, Kris Barnes on bass, Lisa Wooster on guitar, and me. About a year after this picture, Chris Jackson replaced Mike and we were the house band at Dirk's Horseshoe Lounge in Lemon Grove. One night there was a huge fight and the girls said they didn't want to play there any more so we gave notice. The first night after we quit there was a gangland style murder right in front of the band where 3 guys stood up and shot this guy dead. (Corey, if you read this please contact me!) 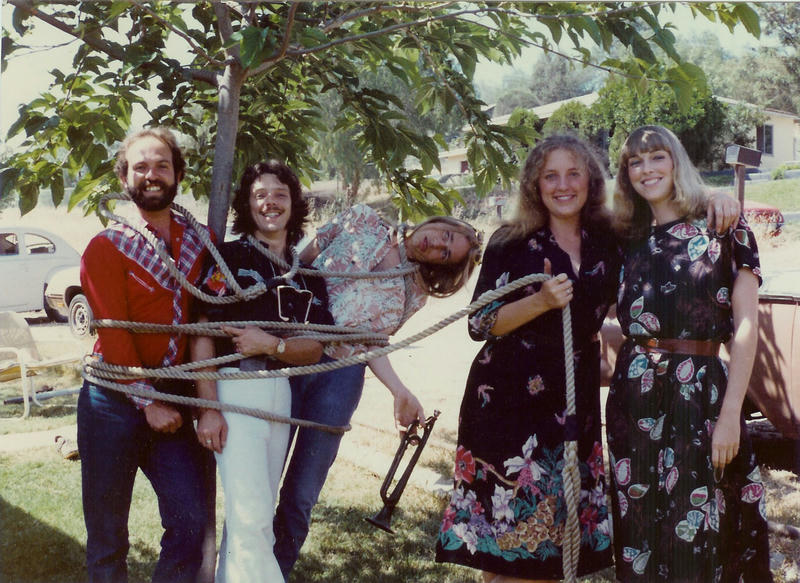 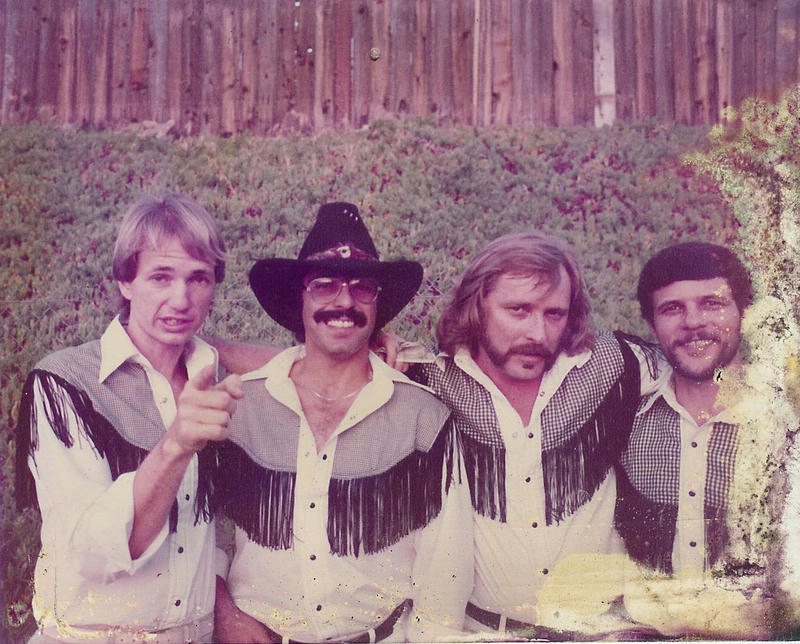 When Al Spears left 'Smokey Joe' we were playing Oldies and Rock at Don's and Don said "If you want to keep the job you will hire Danny." So we hired Danny who was very country and slowly as guys left he brought in his guys until it became "Big Sky". That is why I went from Rock to Country... (It's all your fault Danny!) 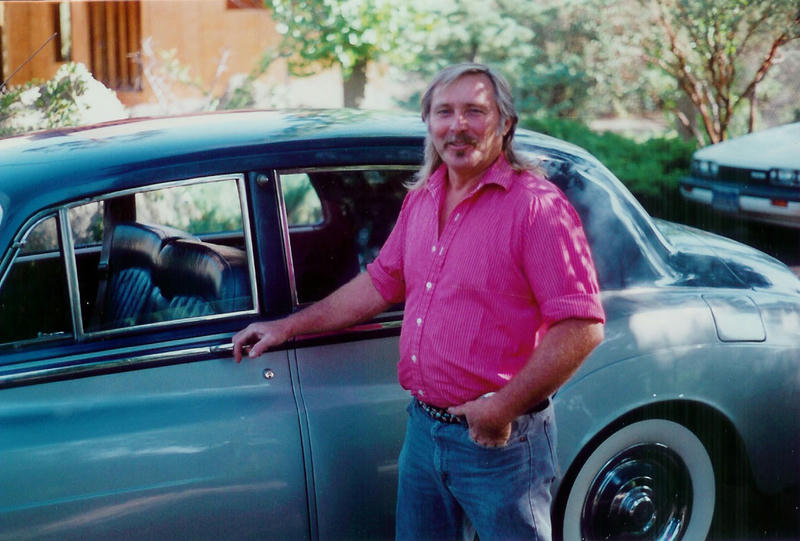 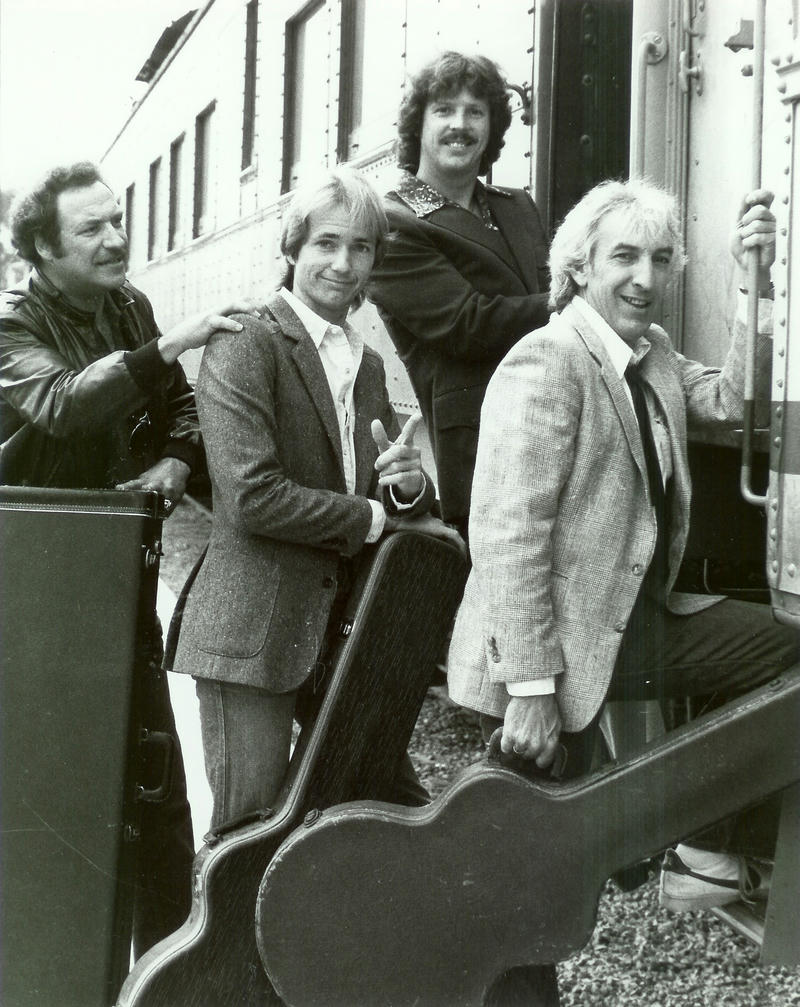 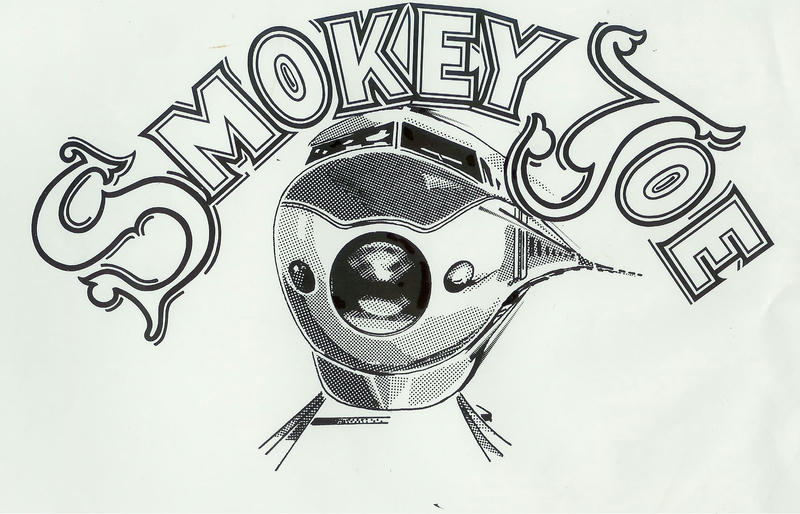 This is the logo designed by Susie Elmquist and made with the help of Marty Elmquist. 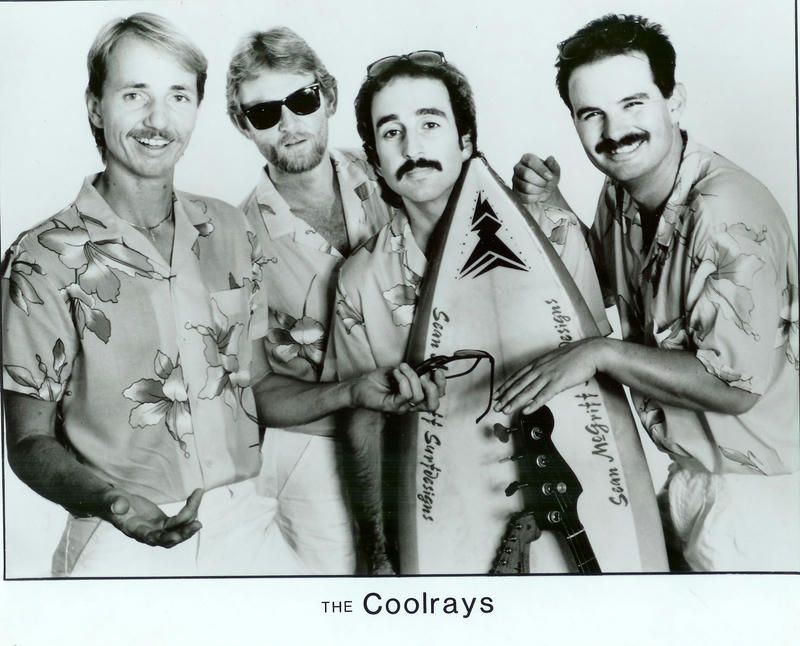 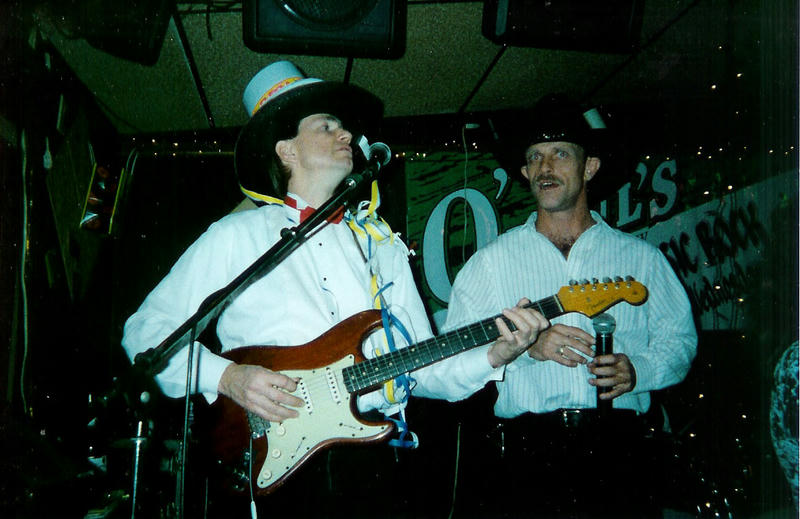 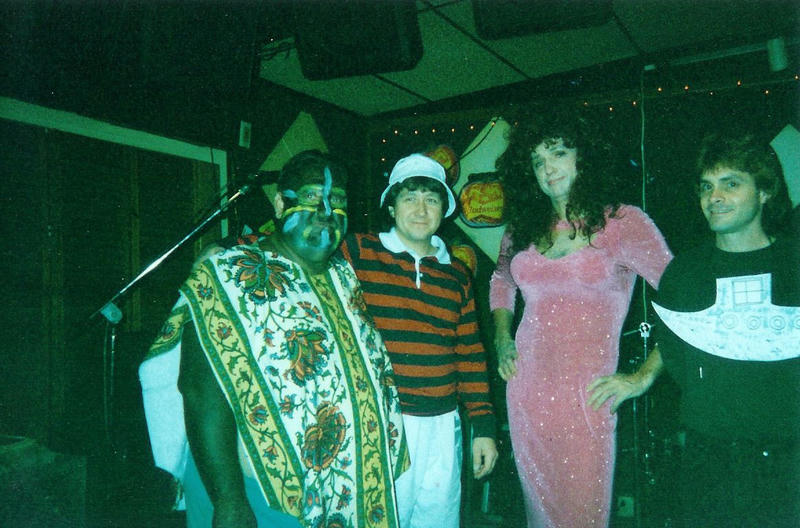 Smith & Western on Halloween at the Flinn Springs Inn

Dressed up as Gilligan's Island. Tony Miller is a native (sound man), Duffy Guerrero is Gilligan (drums), I'm Ginger, Kelly was The Skipper, and Barry was the Boat. 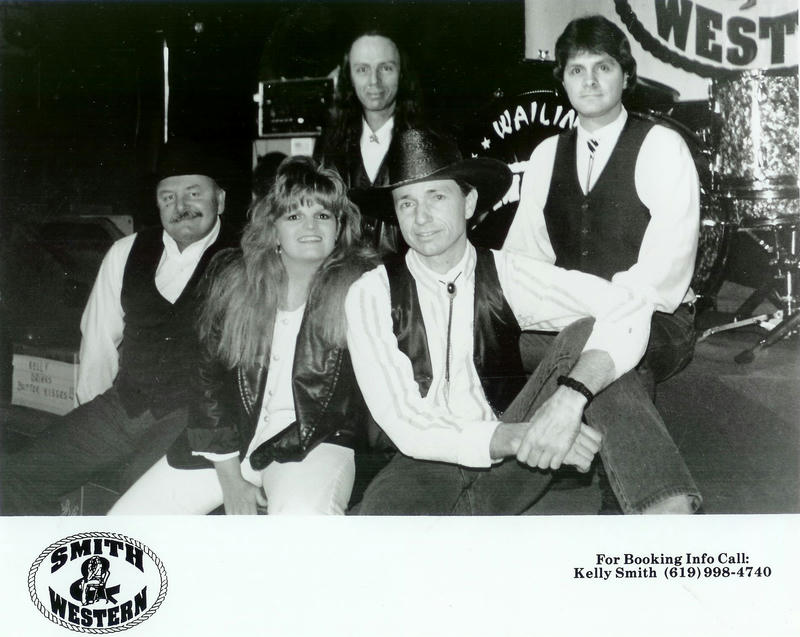 This was a great lineup!! Left to right: Dusty Best, Kelly Smith, Wailin' (Jennings Morgan), Me, and Barry Dubis. 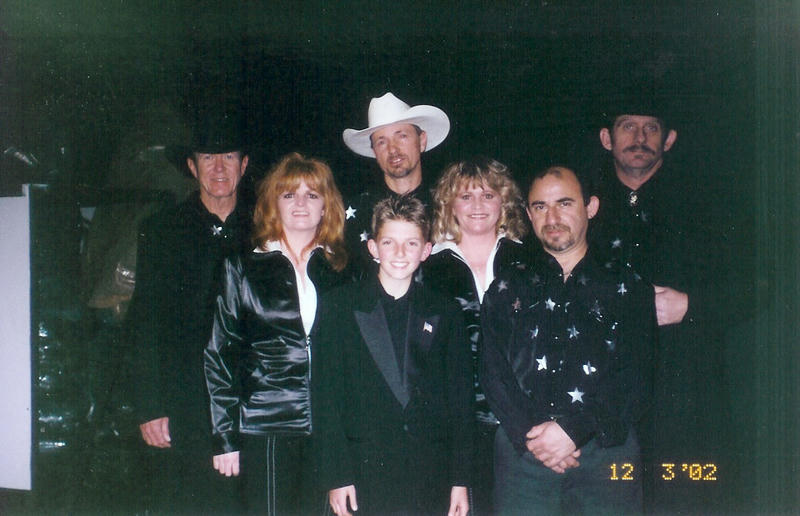 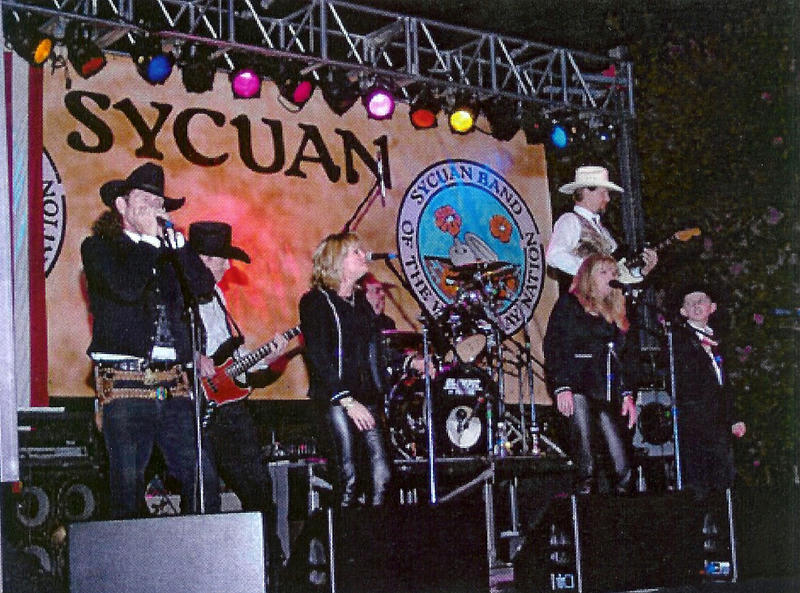 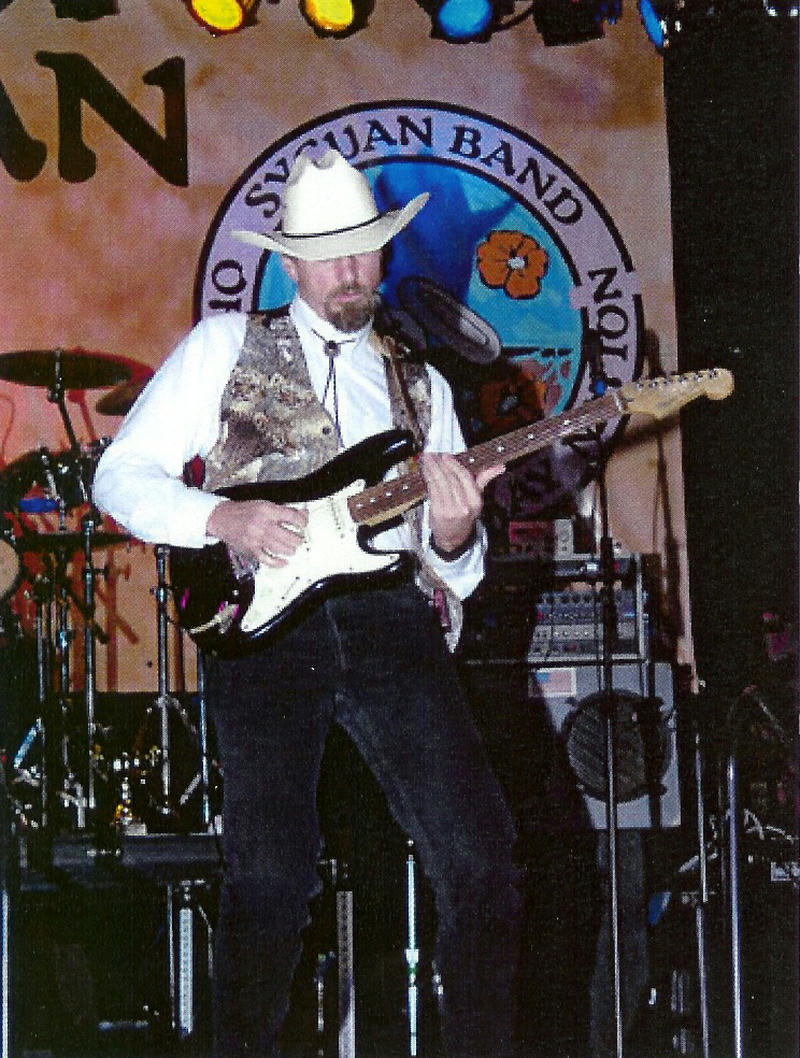 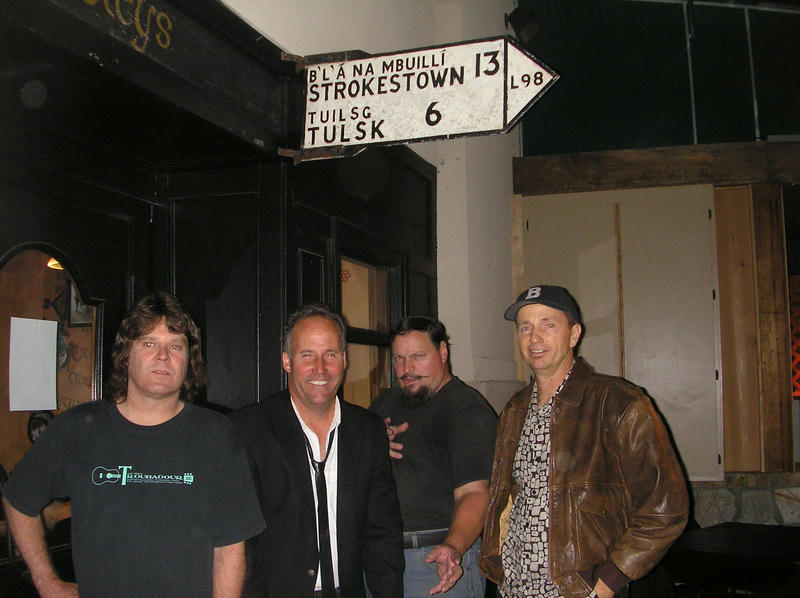 At Hooley's in Rancho San Diego. 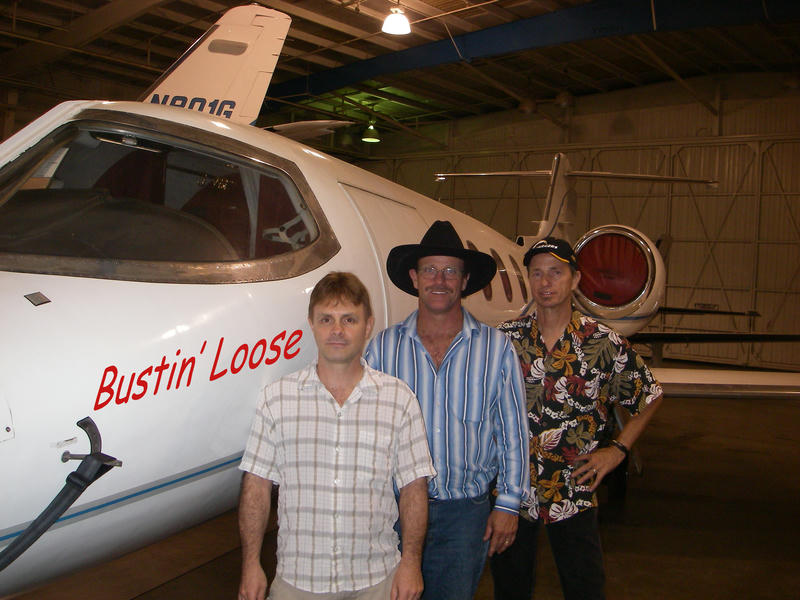 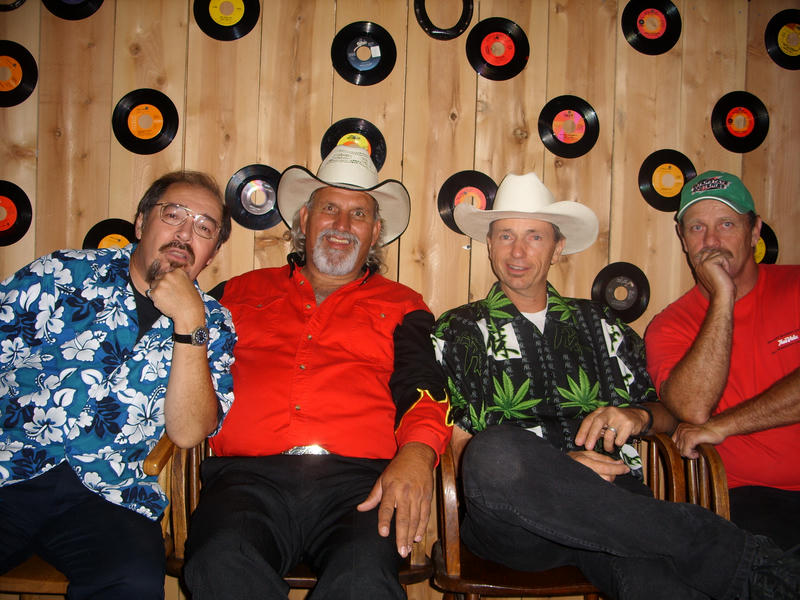